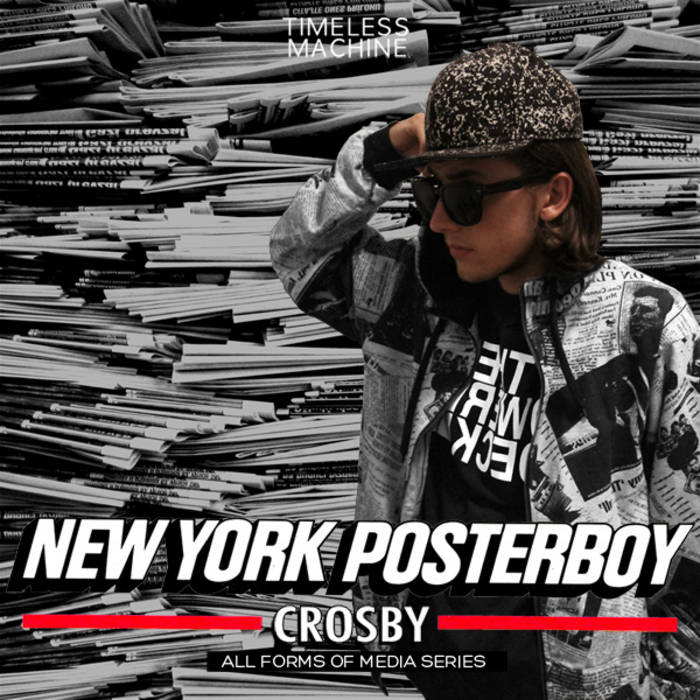 All Album & Singles Art By Crosby.

Straight up from the steaming streets of the Big Apple, a young, ambitious rapper called Crosby just released his digital album "New York Posterboy" online, available through the website www.NewYorkPosterboy.com. The budding artist, also known alternatively as Crosmopolitan and Clockwork Cros, was born in Bellevue to a noted multidisciplinary artist couple from the East Village. From an early age, Crosby became a public figure; he appeared in promo breaks for MTV, fashion photographs by Steven Klein and Tom Munroe and spreads in L'Uomo Vogue, Soma and Pop; posters for the Winter X-Games; music videos by Spike Jonez, Jim Spring, Micheal Gondry and R. Kern and an album cover for Cop Shoot Cop's "Ask Questions Later". He interned at Def Jam, worked at Jeffrey Dietch Projects and for 5 years Crosby produced the multi-artist showcase Hip Hop Howl for the Howl! Festival in the East Village, while also bringing that troupe to the SXSW Festival 3 years running. Currently, Crosby directs music videos for his company Photo-POW and is also the visual artist behind all the cover art and web design for Swizz Beatz' weekly series Monster Mondays.

Crosby has built a vast reservoir of musical material in collaboration with a host of emerging local talent and is now poised to take Gotham by storm with a series of solo album releases, one per month for the next several months, of which "New York Posterboy" is the first. The record is unified by a series of sketches placed within none other than the newsroom of Murdoch's flagship and New York's most popular newpaper, the Post, as a cub reporter that reminds me of my younger self convinces his editor to allow him to break the story of Crosby's splash into the NYC music biz. Using industry beats and a wide range of sampled sounds, Crosby's aural montages express postmodern sensory overload and the funky syncopation of the life of a native New Yorker. Songs such as "The Wait is Ova", "Born in the City" and "Museum Music" show a hip intensity and cultural savvy in his poetry and delivery. Though this is a Hip Hop mixtape, it reminds this pundit of the highly entertaining, hyperkinetic sound of one of his favorite rock records from back in the day: The Mothers of Invention's "Freak Out." His future releases promise to be even more eclectic and innovative.