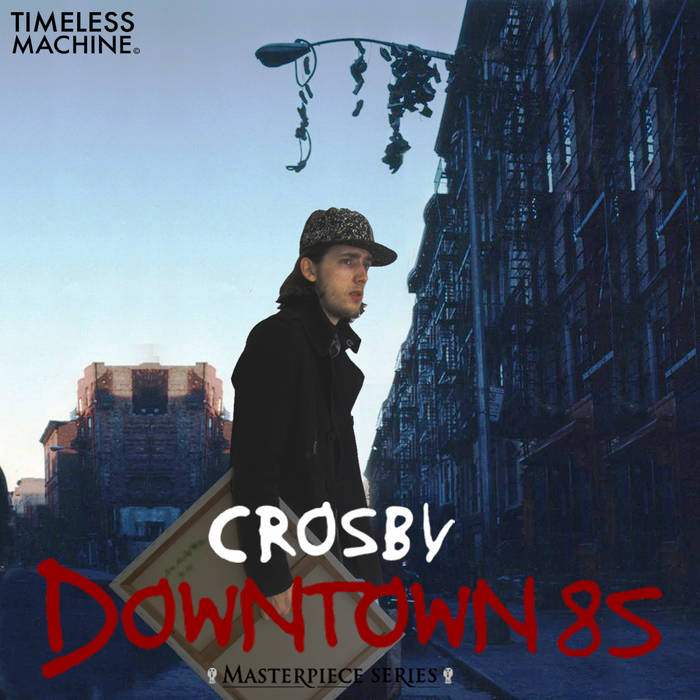 All Interludes are excerpts from Downtown 81, a film that was shot in 1980-1981 by director Edo Bertoglio. The film was written and produced by Glenn O'Brien, and is a rare real-life snapshot of ultra-hip subculture of post-punk era Manhattan. Starring renowned artist Jean-Michel Basquiat and featuring audio voice overs by Saul Williams. The film is a bizarre elliptical urban fairytale surrounding the Lower East Side.

Crosby just released his new digital album "Downtown 85" online, available through the website www.Downtown85.com, just two months after releasing his first mixtape "New York Posterboy" which received widespread attention. The second of a series of ambitious monthly record releases, "Downtown 85" appropriates upon the narrative of Basquiat and his fellow urban artists who come from around the world to the Manhattan's Lower East Side to work with a shared sense of freedom. Crosby establishes that he is of that bohemian tribe; a native born and raised. He was born as crime crack down, Operation Pressure Point, appeared to dent the ever present drug supermarkets of Alphabet City. As Crosby grew up, he watched from his father's shoulders as the police abused the homeless and pressed the will of corporate society. The neighborhood gentrified, while the drug trade continued in hidden form on his street. Crosby quickly learned to understand the increasingly elaborate codes of the dealers and witnessed the devastating effects those drugs had on users. He watched as the landscape evolved and the multicultural diversity narrowed. He saw great artists emerge, only to witness them later be consumed by addiction and AIDS.

Building upon the work ethic he developed doing Swizz Beatz's weekly series Monster Mondays, Crosby delivers another full-length album to his ever growing catalog. The composition of the music and graphics of the records is his response to his culture; it shows that Crosby is multilingual; he speaks the languages of hip hop, street surrealism and urban storytelling. Calling upon the legacy of the LES throughout Hip-Hop history, Crosby re-appropriates the Beastie Boys, Rick Rubin and imagery from the eighties era to link the past and present. The urban fairy tale continues with the memorable hit Deja Vue and the heart-pounding Our Souls Together, featuring singer Jordan Lane. He establishes the independence of the Lower East Village in the anthem The 6th Boro and reclaims his medium with Xtra Large featuring scratches from DJ Dylemma. It's Time is tailored to Clockwork Cros, his surrealist clockmaking identity, showcasing the lighter side of the album. With instrumental production entirely done by ZEPS, Downtown 85 is well worth the listen.